Precision in maneuvering a hockey stick for optimal puck control is high on the list of priorities for any hockey player. It’s a nightmare to have all the proper footwork and gear but realizes that your hockey stick is letting you down because it can’t correctly grip and move the puck the way you want it to. That’s why having the best hockey wax is essential to hockey players looking to perform their best.

Hockey stick wax gives you more puck control while also extending the life of hockey tape. Having a thin layer of wax over the hockey tape reduces friction between the stick blade and puck when taking shots or passing.

Lastly, wax also makes the hockey stick more resistant to water damage, extending the lifetime and time between being new gear. Let’s look into some highly recommended hockey stick wax that gets the job done perfectly!

*The product links in this post are affiliate links, which means that if you purchase after following one, I make a small commission from the sale at no additional cost to yourself. Please see our disclosure page for more information. 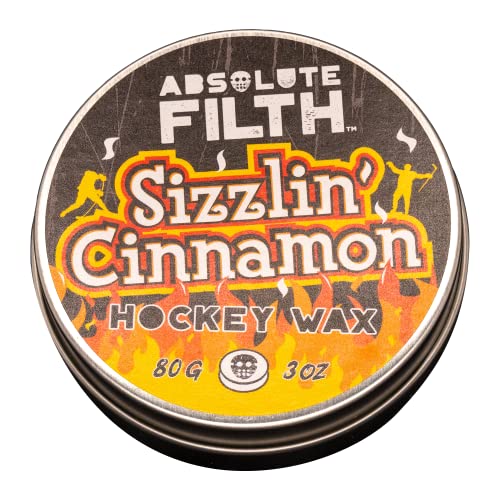 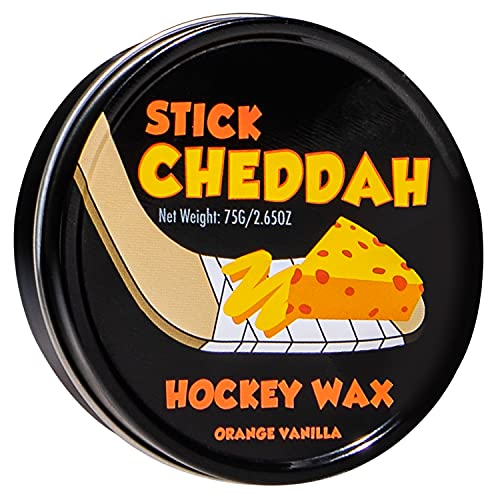 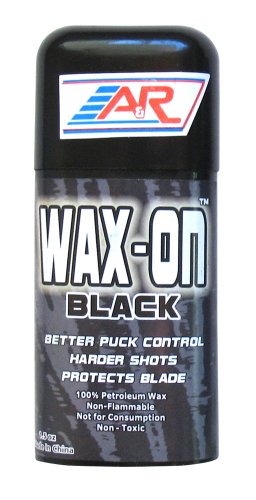 Do you need hockey wax?

Still not sure whether you REALLY need hockey stick wax or not? Here are some key benefits to consider:

You can read more on these in our guide a bit further on, but let’s jump into our recommendations.

Absolute Filth Hockey Wax is made with five different wax types all blended together. This blend is made with all-natural ingredients, which checks off the sustainability box. Also, each was used contributes to making this the elite option for optimal grip and control during matches.

Having the right amount of wax coat your hockey stick helps steer the puck into the net with more precision and also stops water and ice damage to your tape and hockey blade.

Another great thing about Absolute Filth is its easy application. You don’t have to lather the wax. Instead, a couple of layers will already repel water and add the needed friction for optimal gameplay. As an added bonus, hockey players can choose from 8 different scents.

The Wax On Hockey Stick Wax From A&R Sports is another go-to option hockey players can use. Its soft formula allows for easy application and heavy layering without using too much at one time.

The wax itself is 100% petroleum wax, adding a good level of water resistance for tape and hockey blade care. Depending on your preference, you can choose from the clear wax option or the black option.

A&R Sports have been a leading brand for sports accessories for more than 20 years, so many hockey players do use this brand. The wax itself does a good job protecting the tape and adding a good level of grip and feel when playing. The container itself is also designed to withstand being tossed around in your hockey bag without spilling out or causing a mess. 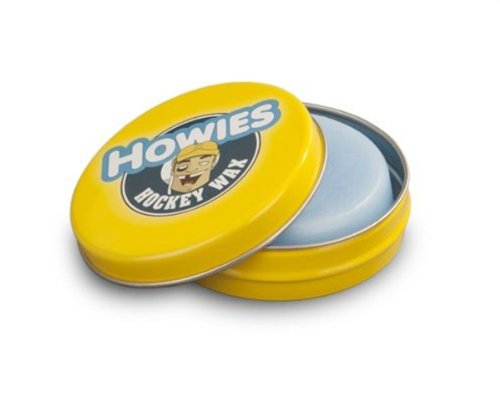 Howies Hockey Stick Wax is another hockey wax to consider. Its main benefit is helping prevent snow build-up, which can cause a shower of ice when hitting the puck. This makes it great for sticks with a fresh tape job, as the wax will provide a water-resistant barrier that ensures it has time to settle without getting water between gaps.

The wax also aids in reducing friction, giving an extra grip that hockey players can use to more accurately maneuver, pass, and score during matches and practices.

Serious players definitely know Franklin Sports for their line of top-quality hockey equipment and accessories. The Franklin Sports Hockey “Stick Cheddah” Stick Wax is another great accessory made for professionals and recreational players who want to keep their hockey stick optimal and in as good condition as possible for longer.

The Frankin Sports Wax makes for more grip for better stickhandling. It also helps prevent ice from building up on the blade for better puck control. 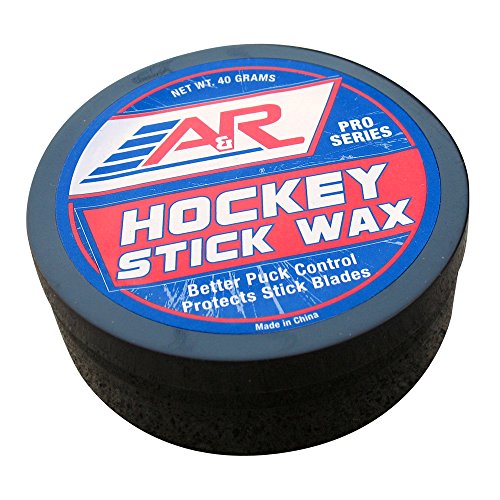 Another A&R Sports hockey stick wax makes it to the list with the Sports ISTICK Puck Form. Just as the name suggests, this wax imitates the look and size of a typical hockey puck, making it easy to toss in your gear bag without worrying about the wax getting everywhere.

The A&R ISTICK wax adds protection to the stick b A&R Sports hockey stick waxlade by adding a sturdy barrier that reduces the likelihood of chips and scratches when it comes into contact with pucks or other gear.

The Puck’N Goon-Hockey Wax has another added benefit aside from ensuring your stick has the added grip and protection. It also eliminates odor. This can come in handy when your stick has been used all day, and the saturation mixes with sweaty gear, so the stape does not absorb any smells.

Overall, the Puck’N Goon-Hockey Wax is a great choice for those who are conscious of bad smells. 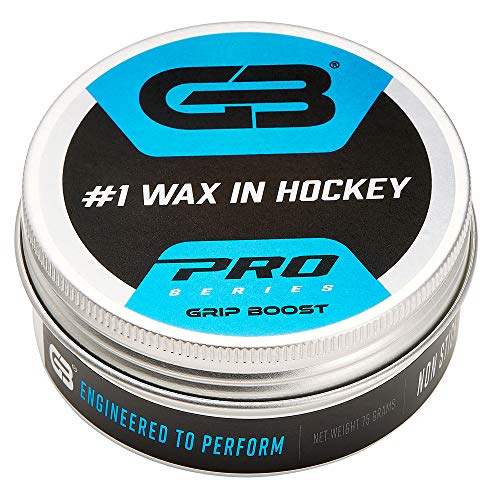 As the name suggests, the Grip Boost Luxe Hockey Stick Wax adds a great amount of grip to your stick. It also repels ice and water to stop buildup while in the game. The Luxe Hockey Stick wax is also great at prolonging the life of the hockey blade tape, making sure it does not unravel in the middle of a game due to moisture seeping in.

This is the option worth investing in for those looking for a serious hockey wax with a reliable guarantee. Each tin also works to ensure the wax stays in the best condition while stored, keeping the consistency fresh even in cold weather or environments.

The Ultimate Hockey Stick Wax comes in a 2.8-ounce tin and works to prevent snow build-up with added puck control. It also comes in multiple colours and scents to choose from to pick your preference. It’s a great choice for those who are aiming to change the colour of their tape without having to rewrap a whole new one. Or you can aim for a clear option to retain the colour you currently have.

Like the other waxes we’ve recommended, the Ultimate Hockey Stick Wax does the job of adding good water resistance and grip to tape. Its ease of use and application is still to be seen, though, as this particular product does not have many reviews to go on.

What to look for in a hockey stick wax

There are tons of hockey stick wax options out there, and each player may have their own preference in terms of consistency and method of application. The goal is to ensure that the wax you get has the tacky feel you are happy with and adds a layer of water resistance to your hockey tape. The last thing you want is for your tape to suddenly unravel in the middle of a game,

However, regardless of these, a few things should remain consistent across the board when using hockey stick wax.

Ease of application to your hockey stick blade.

Most waxes will come in stick form like a deodorant or in a tin with the wax shaped in a circular block. No matter the form or shape, the goal is for your wax to apply easily. You’ll want a smooth glide during application. The wax should be soft enough to have it feel like colouring but not so soft that it leaves blotches like melted wax.

Protects tape job from getting damp and unravelling.

One of the main goals of wax is to protect your tape from falling off due to moisture seeping between folds that can loosen the adhesive. A good wax will add a layer of water resistance to your tape so that it does not collect snow or water. In turn, your hockey tape remains dry during the duration of games or practice.

Stops snow building up on your blade.

Snow build-up on your hockey stick can make it more difficult to accurately pass the puck to your teammates or score a goal since it can make the surface slippery.

While many professional hockey players use wax on their hockey sticks to protect them from water and snow damage, help with more accurate puck control, and enhance accuracy when scoring, not all agree. We’ve talked about the significant pros of using hockey wax in the beginning, but let’s look at the flip side. What are some pros saying are the cons of using hockey stick wax?

How to wax your hockey stick

Applying wax to a hockey stick is very simple. Though the manner of application can vary depending on the wax, you decide to purchase. Some waxes come in a deodorant-like container, while others are a block. There are also some that you need to scoop and rub on. No matter what type of wax you decide on, here are the three steps in getting your hockey stick perfectly waxed.

Step 1: Apply wax to the hockey tape of your blade.

Step 2: Make sure you wax all the way to the lower half of the tick blade, where you handle the puck most.

Step 3: Don’t forget to apply wax to the lower portions, bottom and edges. This will ensure total coverage, so you have control no matter where the puck hits.

Can I use wax without tape?

You can, but it is not recommended. Tape is what puts the most grip and tacky feel for puck control, and the wax is there to add an addition to that and protection to the tape. Without the tape, the puck will just slide uncontrolled off the blade, making maneuvering and targeting very difficult.

How often should I re-wax my hockey stick?

As often as you like. Waxing your hockey stick is all up to your preference in the grip and tacky feel you are after. Waxing more often will create a strong grip in puck control. If you are just after prolonging the life of your hockey tape, waxing before each session or game works well.

Which wax do professionals use most?

Most players on professional teams use Howie’s hockey stick wax, Frankin Sports Wax, or A &R Sports Wax. These are the most popular brands, but it is definitely up to you on the brand you prefer based on the ease of use and consistency you are looking for.

Why is wax important for hockey sticks?

The main importance of hockey stick wax is to provide a water-resistant barrier for the hockey tape. Hockey tape is wrapped around your blade and adds friction for puck control. If the tape absorbs too much moisture, it can unwrap in the middle of practice or a game. Without properly cared for tape, your control and maneuvering can be jeopardized.

What is hockey stick wax made of?

Many hockey stick waxes on the market are made with soft microcrystalline and other waxes. These ingredients aim to prolong the life of your hockey tape. Hockey wax is made to remain soft and sticky, even in cold weather. Some players do opt to just use candle wax, but those looking for a more professional feel with their hockey blade opt for hockey waxes such as Howies or Franklin Sports.

Using hockey stick wax comes with its own list of advantages. Prolonging the life of your hockey tape and stick blade is the most common reason to give it a try. Many players who use hockey wax also love how it makes their bag smell (but this is just a tiny detail).

The added benefit of a grippy tacky feel makes it an excellent option for those looking for the best maneuverability, control, and targeting. These are all very important, especially when passing to teammates or scoring that winning goal in the playoffs.